Sometimes you learn things after the lesson is over. It took me two divorces to learn about marriage.

If you marry someone who wants to control you, marriage is not going to make it stop. If anything it exacerbates the situation and the other person feels entitled to the control. You are married, and now you belong to them.

My best friend’s dad has been with his girlfriend for twenty years. They don’t live together. They communicate daily and see each other a few times a week. For years I thought there was something wrong. How could such a thing work? Surely there is a problem. Her birthday was a few weeks ago and we all went out to dinner. I don’t see them as much as I used to when we were younger and my friend lived at home with her dad. But seeing them together I realized how much they love each other. Sure they only spend a few days together per week, but when they want they can see each other as often as they please. Their communication is just fine. They share their spaces while also keeping their own, spending time together and then retreating into themselves. They have been happy together for twenty years. I finally understood.

Marriage isn’t about the amount of time you spend with the other person. You can be in the same room with someone and both of you existing in different places.

If someone wants to be with you they will. If they don’t, marriage doesn’t solve or prevent that problem.

There is compromise and then there is losing yourself. I guess this goes with the first thing I said in this post, but it reaches beyond control. This is when you try to placate the other person while slowly erasing yourself. As you give up more and more and witness the joy of your spouse, you believe it is for the best. Until you are briefly reminded of those things you once were. But you can’t have both. Marrying someone who doesn’t like you the way you are is eventually going to break the marriage.

Letting your spouse talk you into giving up your dreams only leads to resentment, especially if you had those dreams before you met your spouse.

Marrying someone you are not physically attracted to creates a whole different set of problems. Yes, this sounds shallow, but if you have to be dragged into the bedroom every night on the verge of tears, one of you will eventually end up on the couch.

All of these points sound like common sense. Except, surprisingly, they are not. And sadly they are not things you can learn outside of experience.

Ex husband and I had a bad row last night. It seems he hadn’t made our divorce public, and I have been blogging about it so a lot of his friends had to find out like that. They have been calling him lately to see what is going on and he felt upset. Honestly I didn’t know he hadn’t told everyone, or that he wasn’t telling people right now. If I had, I wouldn’t have posted those blogs. Really, I wouldn’t have.

Yes, I know I am posting this, but at this point it doesn’t matter anymore.

He has been surprisingly very good about everything so I wouldn’t have done anything so callous. I thought it was out. I have been posting almost everything I have written, with very few exceptions, under the impression that everyone knew. According to the fight we had, everyone did know, and that was the problem. Talking with his friends he realized he was the last to know. Apparently I am terrible at hiding things, not to mention people aren’t stupid, so everyone guessed long ago. He had his suspicions, and even as I elided the truth in our divorce discussions, he told me flat out that he knew. He was just hoping others didn’t. He at least hoped others would be surprised, but they weren’t. Even worse, no one seemed to blame me, and I guess that made him angry.

If you know me, you know that I rarely shout, and screaming at me elicits silence. I have found that when people are angry like that engaging them only makes it worse. So I sit patiently, wait for the anger to dissipate, and then if talking is needed it can be done. This time I had nothing to say. It wasn’t really much of a row. He started out mean, and I met his unkindness with quips of my own. He said what he needed, and I had no response. I said I was sorry I had broken the news the way I did. I really was, and I am. As for his friends knowing? Well, I didn’t tell them.

He told me what he thinks I really am. I didn’t reply, but frankly I would rather be that than nothing. 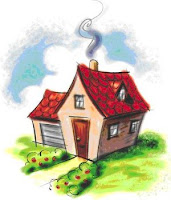 As I am preparing to move, I realize I am going to miss this house. For better or worse, it has been my home for several years. My daughter grew up in this house, and my son was born here. Every wall is painted in colors I chose (for the most part, all shades of yellow). I picked the cabinetry, hardware and door knobs. I selected the wood on the floor, and the carpets in the bedrooms. I arranged the furniture. I have spent days each week cleaning and maintaining.

I realize now why I was so hesitant to leave. It is not the house’s fault that it happens to be the casualty of my mistakes. It did not ask to be built where it is. Had it been anywhere else, perhaps I would have stayed and fought for it. It is simultaneously spacious and cozy. I am comfortable here.

He no longer stays here, but when I move out, this will be his house. It is best for the children. This is where they will come to see their dad, and they will continue growing up here part of the time. I am not big on complicating things. There are things I will fight for, and there are things that are just not worth it. Besides, in divorce battles, no one wins.

My first house I gave to my first husband. My second to my second husband. I think I will just rent from now on.