I was on Pinterest tonight and I saw this pin: 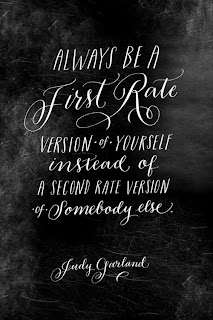 While I am sure that sounds terribly encouraging, what does that mean? Always be a first rate version of yourself instead of a second rate version of someone else. How do you know the difference? At what point can you differentiate that this is you, and this other part of you is not really you, but rather a copy of someone else?
Aren’t you a copy of your parents? (deny if all you want). Aren’t you a compilation of everything you have been exposed to, including other people?
I have also seen other such inspirational quotes that promote having your own unique style. Okay, what does *that* mean? Sure, the majority of my outfits are mix and match throw togethers from thing I saw in Vogue and Vanity Fair, but does that mean the style is any less mine? Besides, unless you live under a rock and make all of your clothes from scratch, there is no such thing as a “unique style” considering every article of clothing is mass produced, knocked off, branded, and rebranded.
But that is all appearance based. What about who you really are. Who is that? Yes, everyone has their own quirks, likes and dislikes, but I am talking about the deeper meaning, asking the question “who are you?” Do you have an answer?
One of my co-workers is teaching Vonnegut this semester. I have never been a very big fan, but that is mainly because I was introduced to his later works in all of their post-modernist glory. Now that I have had a chance to read some of his earlier pieces, I can see the appeal. I was looking at “Who Am I This Time?” from Welcome to the Monkey House.
A casting director comes across an actor and immediately starts using him in every play due to his rare talent. He doesn’t rehearse, or even really read the play, but rather, in merely a few minutes, become the character he needs to be. His entire person embodies the new character, bringing the story to life (Kafka would have liked to read this). He never questions or refuses the assignment, simply asking “Who am I this time?”
At one point he meets a fellow actor, a woman, who falls in love with him. However, he cannot interact with her outside of the stage setting. As long as she plays his opposite in a production she can take in glimpses of him outside of the character, brief moments of lucidity when he is no one except himself. However, these interactions are so fleeting she attempts to find a way to connect with him outside of “work,” and off stage. He refuses all contact with her until she presents him a play. She hands him Romeo and Juliet. Immediately he sinks into his part (Romeo), and she plays Juliet. Unlike on an actual stage that requires he wrap up his performance within a few hours, here the two of them draw out the play day by day until the death scene. It worked.
As times goes on the two actors get work on several productions since it has become well known that their onstage chemistry is good. In between work projects the woman continuously hands him scripts. One day, some time later, she runs into the casting director. He asks how she has been, and she tells him that her and the male actor are quite happy together. He asks how it is going outside of work. She replies that they have done quite a bit, running off an entire catalogue of plays that they have lived out. Neither of them could interact with the other outside of playing a role, and their entire relationship has been a series of love stories acted out back to back.
He says he is looking for actors for another play, and she replies “Who are we this time?”
Yes my little Vonnegut synopsis and the pinterest portion of this blog are related. However, it is the middle of the night, so I am going to let you make those connections.