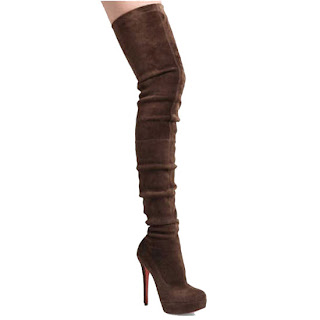 The boot fairy has recently visited my closet and was ever so generous with not one, but TWO shiny new pairs of boots. I swear, I just woke up and they were there. Jenny warned me this would happen.

Oh a completely separate note, I have done some very bad things to literature lately. Namely Derrida. I am sorry, I had to. Don’t take it personally.

Moving on, Ducky is walking!!! Well… sort of… he is walking about three to five feet at a time. Any day now and he can stop breaking Mommy’s back! Seriously, I weighed him, and he weighs 35 pounds. I only weigh about 95… On the bright side, my arms are extremely toned… I mean, if it wasn’t for the fact that I am not a fan of this hot weather, I am doing a great job with the tank tops and halters. I would totally provide pictures, but I am not that vain, so I don’t have any. Not to mention it would be slightly strange to post pictures of my arms. They are not that interesting. I promise.

Munchie is at that phase where she repeats everything she hears. I need to start watching what I say around her. Thankfully I don’t swear, otherwise I would really have a problem. Recently she has been going around telling everybody Mommy drinks too much coffee. As if that was news.

I went to a bookstore the other night. I got lost in art.

My car needed new brakes. I took it in and they gave me a rental. I spent several days trying to figure out how to get it to do what I needed it to do. The buttons didn’t make any sense. There were little pictures that didn’t look anything like what they were supposed to do. It was like playing charades with a car and losing every time. Actually, it was more like pictionary. I still lost.

I want to go to Solvang and buy jewelry. Oh, and they have these little rum ball pastries at this one coffee shop that are absolutely amazing. Delicious.

It’s called a Table of Contents. Learn how to use it. I am not being mean, I am trying to help.

Why am I still awake at this time of night? I am not even doing anything productive! The other night I was up until four in the morning working on a paper. At the end of that I felt accomplished. Now I just feel tired.

I was having coffee with a friend, and I told him I have been unhinged from the inside. He said that was a good thing. He forgot to explain.

I wrote a blog post a few months ago. I lied.

But only a little.