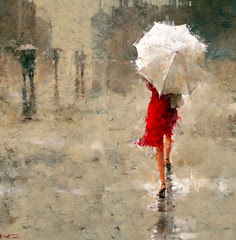 When I was little we lived in New York for a while. I remember one evening outside the subway station, my mother and I were about to go home when a man stepped in front of her and “asked” for her purse. She defiantly said no, and he slapped her across the face. It was one of those hard back hands that she railed from. He then took her purse and ran away. It all happened very quickly and I don’t remember all the details, but afterwards, without a purse we couldn’t get on the subway. She didn’t say anything. She just started walking and I followed her.

It was November, and cold. Not snowing yet, but still very cold. We walked all the way home. I don’t know how many miles it was, but we got home well after ten. It must have taken us almost three hours to make it there. I was exhausted and my feet hurt. Under normal circumstances I would have complained, or asked to be carried. That night I didn’t dare say a word, just kept walking, half running, to keep up with her.

This was before cell phones, so my dad was at home, waiting for us, worried. He was glad to see us, and asked what happened. My mother told him she lost her purse.

I can only hope that the times men have slapped me across the face I have taken it with as much dignity as my mother did that evening. Thankfully there haven’t been many such occasions, and hopefully there will never be any more. Yes, her actions were driven by pride, but there was also a stoicism that bordered on defiance which at times I feel I have inherited from her. I am a tiny woman, easy to slap around. But I have never been brought down.

And afterward, I just walk away.