Procrastination is a skill.

Application deadlines for doctoral appications are right around now. Mine all passed. I am not taking any classes at the moment so I didn’t have any papers due, but if I did, they would be due around now as well.

I turned in all of my applications weeks ago, and if I had papers, they would have been completed at some point in late October. That is just how I operate.

Some of my friends are still in school and applying for various forms of grad programs. They are in a tizzy, panicking over deadlines, and up at all hours submitting things last minute. Some have papers due in less than a week which they haven’t started, and have not even found a topic for.

And they will be just fine. This is how they operate. There is something to be said for the person who can write a fifteen page paper with less than thirty six hours left and still perform, receive good grades and somehow do it all.

Sometimes I envy these people who can put things off until last minute but still accomplish everything they set out to do. I have never been that way. If I were in their position at this point I would freeze up, unable to do anything.

I have always been in the mentality of “what if something came up last minute?” Then where would I be? What if something comes up at work and I have to work later (even later) than usual? What if one of my children gets sick or injured and I have to spend the few days before a deadline at a hospital? Can I bank on anyone else giving a damn about my personal problems and extending a deadline?

Last summer, right in the middle of finals when my father was in the hospital had I not written all of my papers well in advance I am pretty sure my GPA would have suffered significantly. Several months before that when my son was extremely sick I would not have been able to get multiple things done, for school or work. In the back of my head I am paralyzed with the fear of “what if.”

Others are free from this, and don’t seem to worry about what may happen. They function believing that they will simply write their papers the night(s) before, and all will be well. This is not to say it takes me longer to work on mine, but that I am more cautious about the process.

I work better when I believe I have all the time in the world. Introduce a looming deadline and all of a sudden I become illiterate. Tell me I have to produce something in a matter of hours and you will get little more out of me than a blank stare. This is why I am so terrified of standardized tests. I know I don’t work well with these types of restrictions, and it takes every ounce out of me to overcome my deathly fear in order to perform.

But is it real? I have been so afraid of risking everything that I have not actually tried it. If I were to try and procrastinate, would it really be the end of the world? Or would I somehow just do it? Is there some switch inside of me that would flip on and allow me to do as well as I can with stringent time constraints? Can I write my papers the week before?

I don’t know. Procrastination is a skill. That I don’t have. 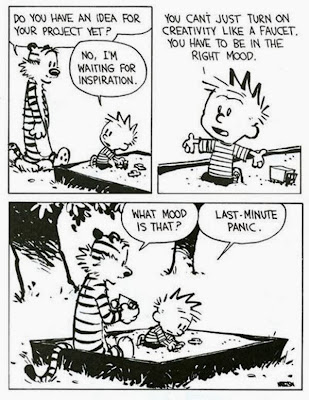