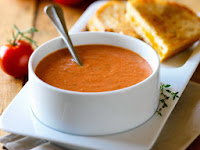 I had soup like my grandmother used to make. It is an odd Romanian soup that I have found others don’t care for, so I have never inflicted it upon anyone else. My children won’t even eat it. They stare at the strange orange liquid with “floaty things” and immediately become suspicious. Ally asks why there are apples in her soup. There are no apples, but the little red quartered potatoes with their skin still on resemble apples. My grandmother used to include pig’s feet, or chicken feet. We didn’t eat them, but she insisted they added flavor. I don’t put them in. I also leave out the ingredients I have either forgotten (to be exact, I didn’t forget the ingredients, but simply what they were called, and can’t look them up), or the ingredients I have never been able to find. So the soup is only a replica of the one I grew up with but it still brings back childhood memories.

My grandmother used to starch everything. She loved starching clothes, sheets, table linens and everything else, and then ironed them into perfect forms. The days when we would wash the sheets were my least favorite as it would take several nights of restlessness to get them soft enough to make the bed comfortable. The table cloth was a pristine white, slightly embroidered, and of course, starched. It would collect crumbs from our bread, and small spills of orange liquid. She would make the soup in the wintertime. Around now in Romania it would begin to snow, the air was as crisp as our table cloth, and we would eat lunch (at around 4 p.m.), of soup, and warm bread with butter. My grandparents and aunt would also have a small glass of vodka. I have never tasted vodka like that again. I used to be allowed small sips from my grandmother. I was only about four, so I would simply dip my tongue into her glass for a taste. Nothing was off limits. Whatever the adults would taste or drink I was allowed to try. I thought it was disgusting. In fact, all of the things the adults had (alcohol, coffee, cigarettes) were disgusting. I figured if that is what adulthood did to your tastebuds, well then, no thank you. But I was curious, and always tried.

Every winter I remember the cold days of soup and vodka. The taste haunts me, but I will never be able to recreate it. I don’t know if my memory has skewed the taste, or if these things simply don’t exist anymore. I don’t make the soup with all the original ingredients, and where am I supposed to find authentic Romanian vodka?

I guess it is strange that I remember some things and not others. I have the most odd memories of my childhood, glimpses of events and everyday things which seemed so innocuous at the time, but have somehow formed my perception of that time. And the older I get the more I want to go back and find those memories again.

And then I wonder what my children will remember. What strange habits of mine will they take with them into adulthood? What everyday events will leave imprints into their memories?