So I finally broke down and bought fish tails. If you have no idea what I am talking about then you have not been privy to my fashion rants for the past year or so against peplums. If you still have no idea what I am talking about, here is a terrible picture of me wearing my newest top. The angle is so bad because I was trying to get a shot of the peplum… yes, the fin looking things that are attached to the shirt. 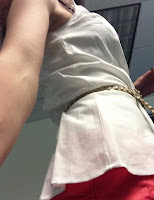 I have been calling them fish tails/flippers/swishy things ever since they became popular. I refused to wear them, or even try them on. I just didn’t like them. Unfortunately they seem to have taken over the market full force as it is nearly impossible to buy a top or dress without these things attached.

So I tried one on. I was suspicious. I eyed it curiously and scrutinized it from every angle. Okay, so I kind of like it.

But this is totally not going to become a thing in my closet. One or two pieces. That’s it.