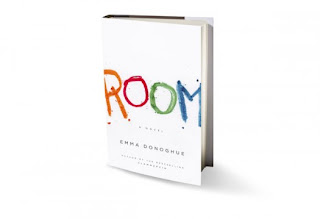 I just finished reading Room. The beginning was a little slow, but by page fifty I could not put it down and finished it before the end of the day. This is when my awesome parenting skills kicked in and I let the kids watch Dinosaur Planet all day so I could finish reading. Ironically the book is about being a good mother. So basically I am neglecting my kids to read about being a good mother. Logic at its best.

For those of you unfamiliar with it, it centers around a mother and her son. She was kidnapped at 19, and locked up in an 11 by 11 room where she would spend the next seven years. During this time period she gave birth to her son (and obviously also the son of her captor). She does an excellent job taking care of him, and upon their release/escape (which is a story onto itself), despite some unavoidable psychological trauma, it becomes apparent that her son turned out very well. I am doing a terrible job conveying the story. It is unbelievably moving (evidenced by the number of times I broke out into tears), but I also think the author was making a few commentaries on society and parenting as a whole. However, she was not being pejorative to any one type of parenting, but rather looking at the pros and cons to different approaches.

During the first half of the book it is clear that Jack, who is only five, is far advanced for his age. Anyone who has children or spends a lot of time around children would note this immediately. Once Jack and his mom are out of their confinement Jack’s cognitive advancement is apparent to everyone, whether you have children or not. Through comparison with children his own age in the story, along with some adults and their perceptions of childhood, Jack stands out. His Ma attributes this to the numerous hours she spent every single day teaching him, and the attention he received (after all, what else would they do all day locked up?) I saw this as a positive depiction (although highly exaggerated) of the benefits of homeschooling. Yet, the author does not condone homeschooling entirely either. As Jack emerges from his cell he is unable to socialize properly, and has great difficulty integrating himself among other people. I personally would chose cognitive skills over social skills. But that probably has more to do with the fact that I have plenty of the former, and not too many of the latter. Other people may disagree with which is more important.

Room also highlighted basic human behaviors. The book is written from Jack’s perspective, and he has spent his life, since birth, locked up. As he emerges into what he calls the Outside, he notices things to which the rest of us are desensitized. One of the most striking remarks, that he makes over and over, is about how we rush through everything. We are always too busy to enjoy anything, and even when we assert we are enjoying ourselves, we are rushing through that. We are too busy doing seemingly unimportant things and ignore those things that have true meaning. And we are always working.

I think that Jack’s perspective gave the book the necessary angle and push of emotion to enlist the type of reaction I (and several million other people) had. Not only was his view fresh due to his young age where thoughts were not mediated through agendas, but also by the fact his youth was coupled with the experience of confinement to the point where he was conscious of his surroundings, and able to articulate his thoughts, but also acting like a newborn, exposed to our world for the first time.

And yet, even someone who is not young, or new, can understand what he means, and realize the truth of his words.