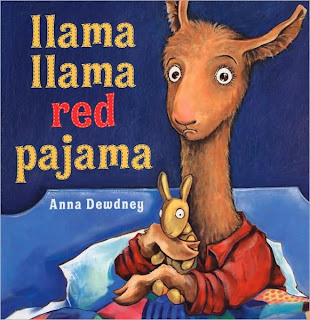 It starts with “Llama, llama, red pajama…” as I recite the entire book from memory. For Christmas one of the kids received Llama Llama Red Pajama. I am pretty sure it was a present for Ducky, but Munchie loves it so much it currently ranks as her favorite book (not that Ducky doesn’t love it too, but he is just too young to show that type of enthusiasm). Which means we read it multiple times a day. Last Sunday between hubby and me, I think the book got read over a dozen times.
“Llama! Llama!” she yells out randomly, requesting the story begin. I immediately launch into my recitation. But it is not enough. She wants the accompanying pictures. So I flip through the book with her. We reach the end. “Llama!” And it begins again.
But I have to admit. I love this book as much as she does. Well, maybe not as much, but it quickly became one of my favorite children’s books. It is not only catchy, but also very cute. The pictures are well done, and the end makes me chuckle.
Sometimes hubby and I sing the book to her since the beat makes it easy to convert to song. My favorite part however? Munchie is learning so many new words from it!