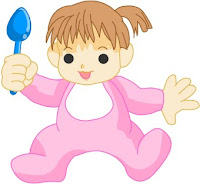 I have several friends with small children, and it has occurred to me that they believe at Thanksgiving tomorrow evening they will be having dinner with extended family and friends. I am sorry to be the bearer of bad news, but children younger than four (and sometimes older), will not sit through an entire Thanksgiving dinner. Or any dinner for that matter.

Small children  need to be entertained throughout. Forget getting them to actually eat the entire time, but simply having them sit relatively still at the table while you get a few bites will require an entire circus performance on your part. However, it can be done. I have done it before, and I plan on doing it again tomorrow.
You know that saying about idle hands and the devil, and something like that? Well, it *is* like that. The best and only tip I have for you and keeping your small children seated is to not allow them to get bored, because that is when they take it upon themselves to scream, cry, fidget, play with food, etc.
Pick a few toys (preferably plastic and/or easy to clean) that your child loves to play with and bring them to the table. Don’t give your child all of the toys at once as he will get bored of all of them simultaneously.
Once dinner is served, have the little one eat which should take a bit of time. Once they are done you will probably still be eating. Hand your child a toy. He will play with it for a while, and then get bored and start fussing. As long as you have several toys that you can trade out, this should keep him busy for some time.
The only caveat is that this will only work for about an hour at most, after which the child will be restless. If you have the sort of child that at this point will take a nap, or be okay just sitting on your lap while you continue on, then that is wonderful. If you don’t have such a child, then get up and walk around/play with the child away from the table for a bit. Chances are just a little movement will suffice to calm restlessness and general fussiness.
Yes, you will have to repeat the above all night in roughly hour intervals. But it is not so bad. And better than the alternative.