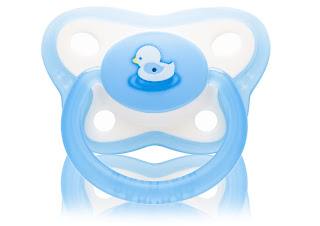 Today I took Munchie and Ducky for their well visit doctor appointments. I was pleased to hear that they are both progressing well. There are a few changes we have to make in their diets, but for the most part the doctor told me we are doing a good job. Generally I am very good at following her orders, because, after all, she is the one who went to school for all those years studying to do what she does, and since she has been doing it for so long she probably knows a lot more about kids than I do. At least I hope.
But today she said in a few weeks, when Ducky turns nine months old, we need to start weaning him from his binky. Ok, the kid barely sleeps as is, I am not sure taking his most basic comfort object away is going to go well. The binky was a huge problem with Ally. When our doctor told her us to take it away, it became a serious problem, and with a lot of kicking and screaming we finally succeeded to reduce her binky time. Reduce, not eliminate, because that was a bigger battle than we were prepared for. Then baby brother Ducky came along. Munchie was not happy, and we had to relinquish her Binky back to bring her some comfort as she was adjusting to our newest family member. Not to mention she would steal it out of his mouth and send him into frantic fits if she didn’t have her own. So really, we had no choice.
One day, after everything calmed down, and she accepted Baby Duck as best she could, her binky just magically disappear. We “helped” her look for it, but “unfortunately” we could not find it. She asked for it for a couple of days, and then it was all but forgotten. If she would reach for Ducky’s we would remind her that that one is his, and hers is lost. She would nod in agreement, and that was the end of that. In less than a week there was no more talk of her binky and she was fine.
I learned that we were making the binky out to be more than it really was. When the time came, she was rid of it. There was never anything to really worry about. Sure, there are those kids who have binkies permanently attached to their faces until the age of four, but so what? If Eventually they will be rid of it. Just like Ducky’s teeth will come in at some point, and he will eventually crawl, and at one point walk and talk, so too will he rid himself of his binky. I most definitely will try to aid the process along, but frankly, if he wants it for a few extra months, then I am OK with this.
How do you feel about binkies?