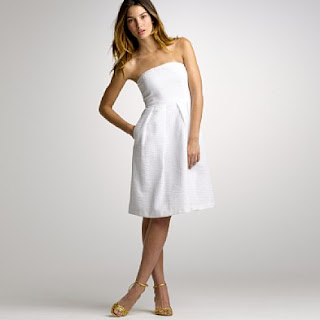 This weekend I went shopping. I wasn’t looking for anything in particular, I was just trying to update my summer wardrobe a bit since I spent the last two summers either pregnant or recovering from being pregnant.
My how fashion has changed. I love wearing skirts in the summer months, and I thought I would look around for some trendy new ones. Since I spend the majority of my time at work I wanted to find something that was also work appropriate. Apparently the definition of work appropriate attire has also changed.
I was looking for something knee length. I am no doctor, so anatomical precision wasn’t my biggest concern. I would settle for anything within the general vicinity of my knees. It seems in the last couple of years all the real estate in knee territory has been sold and the hemlines were forced to migrate far north. I definitely could not wear any of the dresses I found at work. In fact, I am pretty sure I should not be wearing those dresses anywhere. Society would benefit.
I found multiple really cute tops. I got a new sweater. But in the back of my mind I kept thinking of finding a dress or skirt. I found one. I snatched it off the rack and sure enough it was in my size. And it was knee length! Unfortunately it is also strapless. Which means I will be having to wear a cardigan over it. I was beginning to think there is a new rule that mandates only so much material be used to fabricate a dress. Since this one was considerably longer than the rest it compensated by having no sleeves. But I have to admit it is easier to put on a cardigan than to try and invent a new fad for thigh warmers. Which is what I would need with the other options on the market.
My theory on “only so much material be used to fabricate a dress” was proven wrong only a few hours into my shopping trip. There seemed to be an abundance of dresses and skirts made for women much larger than me in every dimension. Even in my four inch heels these dresses would drag on the ground. And as for the waist? I would have to use every belt in my collection to keep these things from falling down. Yes, they were long, far longer than knee length. And they were made of the flowey, soft material I sought after. But I am not sure how many alterations these dresses could sustain and still maintain their style and shape. Also, their abundance made me think that maybe there aren’t that many women made to fit into them.
Even though I made out with tons of cute tops, I still felt like I should write a strongly worded letter to someone in fashion. Because either they don’t work in an office, or they haven’t gone out lately to see what real women look like. Possibly both.
In the meantime I will make due with my new dress/skirt and billion tops to go with it.