While I was trying to forget and simultaneously find myself, Victor had a career and responsibilities, so he could only join me on haphazard extended weekends through different countries. His main appeal was that he never tried to sleep with me. He never even tried to touch me until we made it to Dublin to stay with his brother… six months later. Unfortunately I never kept in touch with Victor. We spoke on the phone for a few months after I returned to California, but then we lost contact, and I lost his number. With social media what it is you would think I could find him again, but I never got his last name. Again, it seems strange now, but then, I never actually thought I would need it. I never looked at his passport, or the few times I saw it I never paid attention. I had his address, but never used it. He lived in Haarlem (the Netherlands, not New York), but that too is not enough to ever find him again. Not to mention it is unlikely that he is still in the same place after all these years. He was renting a flat that appeared to be rather temporary. Maybe he has children now? A family? Is he still in the design business? Does he still like bad sushi and Irish pubs? Who knows.

He tried convincing me not to board my connecting flight and just leave the airport. I laughed and told him I would think about it, with no intention of doing so. He said if I changed my mind he would be in terminal 3. It was many hours before my next flight,  and I did indeed leave the airport, wandering around by myself. I went to a local coffee shop in Kloten, and started thinking about it. I couldn’t believe I was actually thinking about it. I went back to the airport, found him, changed my flight, couldn’t get onto his flight, both of us changed our flights, and the next thing I knew I was in Amsterdam.

The whole experience was so different from one I had recently. I was at a conference in Portland and a man from Washington was there. We were presenting at different panels on the same day and I had mentioned my intentions of going into the actual city the following day and exploring for a bit. He wanted to join me. I wasn’t too keen on the idea, but whatever. That night, after the conference I was having drinks with two people I actually knew and he came to join us. He was only there for the last part of the evening, but he couldn’t remember my name (kept calling me Crystal), couldn’t remember what I had presented on (he had been in the audience), and couldn’t recall a thing I had said in the past ten minutes, but he was Hell bent on spending more time with me. Needless to say I didn’t need to think about whether I wanted him to join me on my downtown Portland escapade the next day, and hadn’t given him a thought since. Two days ago he contacted me via a social network (he must have finally figured out my name… and we happen to have a mutual acquaintance). And for those of you wondering, no, he probably won’t be reading this blog. The social network he found me on is not in any way linked to my blog, and he would actually have to Google me to find this – something which he probably won’t expend energy on considering that during our very brief conversation it appeared that all he wanted to do was fly to Los Angeles for the sole purpose of getting me drunk/sleeping with me under the very thinly veiled premise of wanting to learn from me. Considering he has a more advanced degree than me, I was under the impression the learning process would be happening the other way around. So, if there happens to be a female shortage in Washington, he has failed to motivate me to get on the next plane. I would have been more receptive if he hadn’t said that he want to take me out to a swishy bar (no idea…) and then come over and explore my library (with a strange little winky face attached). No. Just no.

He has no idea that I will be in Portland again in the next few weeks, nor will I be sharing this information with him. I don’t know why all of this reminded me of Victor, but it did. Well, there are definitely certain parallels, but these two were nothing alike. Victor never hid his attraction towards me – he stated it from the beginning, and then left it alone. He never as much as laid a hand on me despite that I was in a foreign city, he paid for everything, and I slept in his apartment that night. That was our entire dynamic. On weekends, if he could, he would fly into whatever city I was in and keep me company. He never pushed for anything; the only indication he even wanted me was in his eyes, and he kept quiet about it. Cell phones weren’t a thing back then, and I would tell him when I would call. I would go to a pay phone and he would be at home to pick up. After a few months it became a nightly thing, and as winter turned into spring and summer I would spend my evenings at pay phones calculating time differences.

Then it was time for me to go home. He wanted me to come back the following summer, but I knew I couldn’t. I needed to get back to real life, and move on. I couldn’t live like this. Not to mention not working for eight months and running around Europe depleted my bank account to practically zero. The Euro was fairly new and hadn’t been adopted everywhere, meaning I was operating on whatever exchange rates were in each country. The dollar was still higher than most, otherwise I would have been broke long before. The key was to stay away from touristy places, and out of England altogether.

I don’t know what it is, but whenever men insist on physical contact it makes me want it all the less. I have thought about it, and maybe it is a control issue. I want to be the one to decide when something happens, which generally entails waiting. If I feel forced, I have no control, and I want none of that. I guess that is just the way it is.

Today was good, especially in comparison to yesterday. My presentation went very well, and I got to meet a lot of very wonderful and brilliant people. I am not going to really talk about the conference since most of you who have been to conferences know what it is like, and for those of you who haven’t, well, my paltry description won’t really elucidate much.However, during one of the longer breaks I walked around a bit and took some fun pictures.

This was directly across the street from the conference. 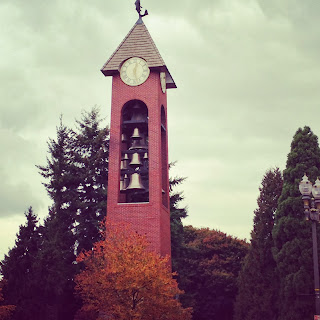 I tried getting a close up of the tower…. 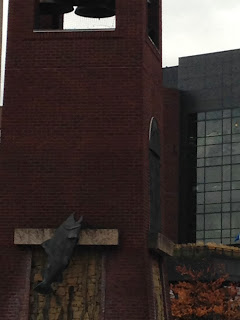 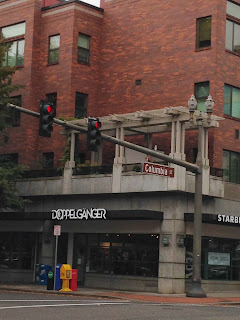 There was a park/sitting area down the street…. the autumn colors looked so beautiful. 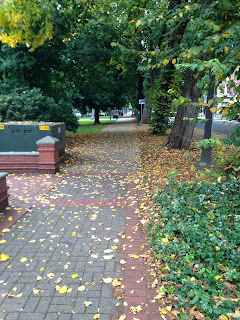 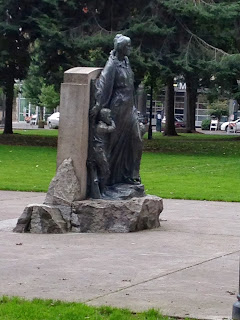 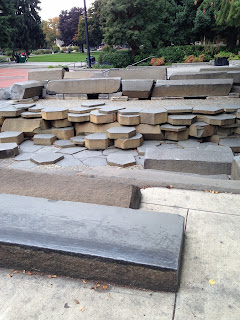 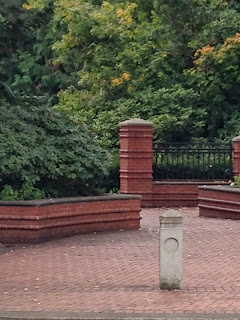 This is a terrible picture, but this coffee shop was actually pretty cute. 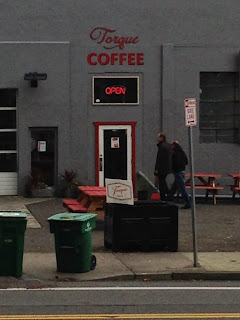 I haven’t the slightest clue what these things are, but they reminded me of printing presses. Either way, this building had a bunch of them, and I had wanted to take pictures since yesterday… finally got a chance to do so as I was walking back to my car tonight. 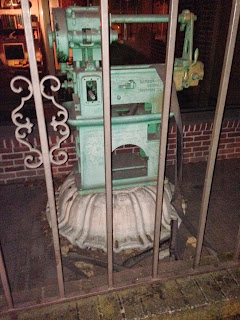 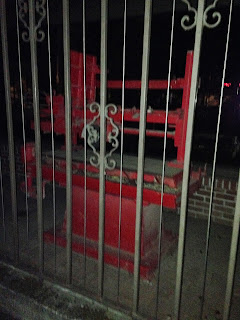 Tomorrow I am going into actual Portland, so I should have more to share then.

Today was exhausting. I have been up since three in the morning and had to be at the airport before the sun was even up. The flight was fine, but the car rental place was not. Everyone and their brother decided to rent a car today, and the wait was almost two hours. I had reserved a small sedan, but by the time I got to the counter they didn’t have any left. I ended up with an SUV type thing. It is a Ford of various natures. They didn’t increase my cost any, but the car is a little bigger than what I am used to, so I am driving cautiously to the point of probably annoying everyone else on the road.

By the time I got to the hotel, changed and drove across the bridge I pretty much missed more than half of today’s conference and was only able to catch one panel, after which they had a social hour/banquet.

I chatted for a bit with people who I have until now only spoken to via email, but I wasn’t feeling altogether social. In fact there were so many people there I felt slightly overwhelmed.

So I am having dinner in my room with my blog and books.

Highlights of my day? Hot shower and the fact that there is a Starbucks 0.2 miles from my hotel.