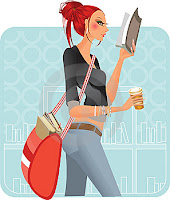 Continuing with my studying, I realized my last list was lacking. I know I didn’t mean to create anything even remotely comprehensive, but I realized I left some pretty important stuff out, like Whitman and Falkner (both have been added now to the previous list).

The following authors and works are not in any particular order (and only works that are most likely to be tested are listed). This list also includes some of the less likely to appear names, but worth a mention anyway.
George Bernard Shaw – Pygmalion, and maybe Arms and the Man. He also has a lot of criticism that were published in various gazettes.
Arthur Rimbaud – Le Bateau Ivre
Samuel Butler – Erewhon, and the maybe The Way of the Flesh
Samuel Butler (not the same as the one above) – Hudibras
John Dos Passos – Three Soldiers
Robert Frost – The Road Less Traveled, Mending Wall, Stopping by the Woods on a Snowy Evening, and Desert Places.
Langston Hughes – Not Without Laughter, and maybe The Ways of White Folks
Allen Ginsburg – Howl and other Poems.
Robert Burns – I don’t know which ones are his most important poems. They are all fairly short so if you look through a few you should get a sense of his style.
Flannery O’Connor – A Good Man is Hard to Find, and maybe Wise Blood

Oliver Goldsmith – She Stoops to Conquer

John Berryman – The Dream Songs
Anne Bradstreet – Tenth Muse
Anne Bronte – Agnes Grey, and The Tenant of Wildfell Hall
George Gascoigne – Hundredth Sundry Flowres (retitled later)
Thomas Carew – A Rapture, the Celia poems, and maybe The Spring.
John Webster – The Malcontent, and The Duchess of Malfi
Samuel Pepys – Diary of Samuel Pepys
Hugh Latimer – His Sermons
Dante – The Divine Comedy
Albert Camus – The Stranger
Thomas Chatterton – This is another one where I don’t know what is most important. In fact there is more I have read about him than by him.
Gerard Manley Hopkins – The Wreck of the Deutschland, God’s Grandeur, and maybe Carrion Comfort
Dylan Thomas – Do Not Go Gentle into the Good Night, Death Shall Have No Dominion, and maybe Under Milk Wood.
William Dean Howells – The Rise of Silas Lapham and maybe Through the Eye of the Needle
Sir Gawain and the Green Knight
Honore de Balzac – The Human Comedy
Elizabeth Gaskell – Cranford, Mary Barton, and maybe’s Sylvia’s Lovers
Charlotte Perkins Gilman – The Yellow Wallpaper
J. S. Mill – Autobiography, On Liberty, What is Poetry?, and maybe The Subjection of Women
Hart Crane – The Bridge, and maybe collected poems.
Emily Dickinson – Her poems are short, so read as many as you can. She has a distinct style, easy to recognize.
Marcel Proust – Swann’s Way, Remembrance of Things Past, and maybe In Search of Lost Time
Maya Angelou – I Know Why the Caged Bird Sings, Still I Rise
Jorge Luis Borges – The Aleph, The Secret Miracle, Tlon Uqbar and Orbis Tertius
T. E. Lawrence – Seven Pillars of Wisdom
Rainer Maria Rilke – The Book of Hours, Duino Elegies
R. H. Dana Jr. – To Cuba and Back
Edna St. Vincent Millay – The Lamp and the Bell, and The Princess Marries the Page. Her poetry is fairly short, so you can skim through it. I am not sure which ones are considered the most famous.
Kate Chopin – Story of an Hour, The Storm, and maybe A Pair of Silk Stockings
Walter Savage Landor – Imaginary Conversations
Edith Wharton – The Age of Innocence, The House of Mirth, Ethan Frome, and maybe The Touchstone and The Buccaneers
Malcolm Lowry – Under the Volcano
Oscar Wilde – The Picture of Dorian Gray, The Canterville Ghost, Lady Windermere’s Fan, and maybe The Happy Prince and other Stories
I still haven’t done the Russians yet, will get to those shortly. I am sort of working on the Classics, and should have them done sometime soon.