Today I stayed local. I was meeting up with a bunch of friends in the Berkeley – Emeryville area, so I forwent going out into the city again. I am saving that for tomorrow.I started by having a cute little breakfast at the hotel. Even though I had to wait 45 minutes for my waffle, it was totally worth it. This waffles were like crack. I actually contemplated going downstairs again and waiting another 45 minutes for seconds. I have a very strong relationship with food. I like to eat it. It likes to be eaten. Very mutual on both our ends. Except I was running late. Not that I had to be anywhere for a while, but still. 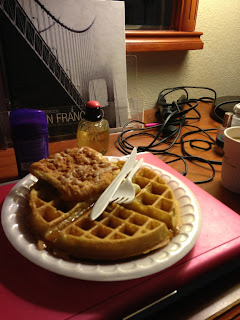 And just in case the giant waffle didn’t provide enough sugar, I stuck a pastry in there too. The dining hall was packed, and there were several families trying to have breakfast so I felt bad taking up an entire table. Also, I didn’t want to feel rushed, so I took it to my room and ate it on my desk/make-up counter, on top of my lap top.
I also used the mirror that was right in front of me to take a half decent self portrait. I first tried without the mirror, but I kept taking pictures of the lamp. This was the best I could do. 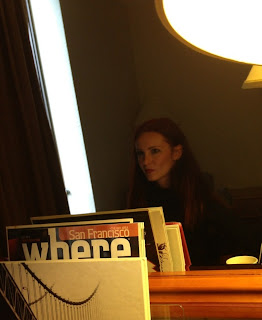 I spent most of the day at University Ave. and Fourth Street in Berkeley, taking in the little shops and reminiscing about the last time I was up here, shortly before Tanya’s wedding. Has it really been that long??

Then I walked down University Ave. all the way to UC Berkeley. It was a lovely walk, but I got a little carried away at a few of the little book stores and ended up hoarding with me a hefty amount of books. As I was walking around on campus, lugging my new books, I felt like I was in college again. Real college. It was very nice walking through a university town again.

Afterward (having now walked over eight miles), I needed a break and met up with my friend James at his apartment. I got to meet his boyfriend, Martin, who makes the most exceptional coffee I have ever had. It was so good I told him I would marry him for his coffee. He laughed, and I assured him I was totally serious. I mean, I understand he doesn’t like women, but we could have a completely platonic marriage where we just drink coffee all day. Better yet, we don’t even have to get married, he can just drive to my place every morning and make me coffee. No strings attached. Yes?

The most entertaining of my day, however, was taking a wrong turn onto Fruitvale Ave. I have a knack for not just getting lost, but getting lost in the worst part of town. Several times in LA I have gotten lost in the city, and almost each time I would take that wrong turn onto skid row. Going to LAX? Ended up in Crenshaw. Not even sure how that happened. I just remember the last time I was there I was driving around looking up at the sky trying to find planes that looked like they were landing so I could see which way they airport was. Today was no different. I managed to find the shadiest part of town and get lost in it. The highlight of my little adventure was the half naked man at the gas station where I stopped. As I was making a very quick bee line for the door of the mini mart he came at me with his pants around his ankles. Before anyone gets worried, I was in no danger. It was broad daylight and there were at least two dozen other people at this very busy gas station. In fact I almost wanted to stop and inform him that he would probably run a lot faster if he pulled his pants up.

Later in the evening I met Aaron at his favorite cocktail lounge in Emeryville. He was just flying back from Seattle and was running late. He sent me a series of messages profusely apologizing, but I assured him I am excellent at keeping myself entertained for prolonged periods of time. No rush. However, as luck would have it I took a wrong turn on the freeway and instead of heading towards Emeryville I was about to cross the Bay Bridge into San Francisco again. After navigating all of that and avoiding the toll booth I was the one who ended up late. He told me that is actually a common mistake and he has ended up having to loop across the bridge on several occasions. Made me feel better.

He took this picture of me at Honor Cocktails. 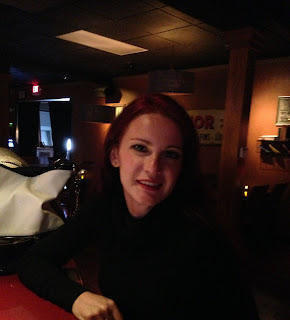 Aaron suggested we go to the Jacuzzi in his building and dip our feet in after dinner. I was wearing these ridiculous boots, covering even more ridiculously tight jeans. If I were to make an effort to take all of these things off, after having come into contact with warm water I would not be inclined to put them back on. And then I would have to drive the rest of the evening bottomless. Aaron told me that that is illegal. I reminded him that I would still be wearing panties, and considering what girls are trying to pass off as shorts these days, I could totally just go around in panties. The moral of the story? I should forgo pants from now on. No? You mean you didn’t arrive at the same conclusion? What? Why not? The guy at the gas station obviously thought that was a good idea.

It was nice seeing friends I haven’t seen in a while. Except for Aaron who I just saw a couple of weeks ago at Tanya’s baby shower, and Martin who I just met. So really I am just referring to James. Either way, it was nice to see all of them. We talked, and laughed, and had delicious coffee, food, and drinks.

Sometimes talking to people who don’t see you on a regular basis really helps put things in perspective. They show you parts of yourself that they see from the outside, not being privy to the everyday. All three of these people have seen me grow immensely over the last decade. When your best friend tells you how wonderful you are, you begin to take it for granted. When people who have no vested interest remind me of what an amazing woman I am, it makes me think that maybe I am as good as they think. Maybe I do have all of those charms they claim.

In conclusion three gay men think I am exquisite, and one man who had the kind of presence of mind to run around Oakland with his pants around his ankles said I was “one fine lady.” I am special.