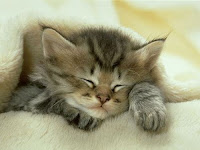 On MentalFloss.com I found an article for 38 wonderful words in other languages that should be incorporated into English. I am posting the list here, with my own notes and comments on how I would use them (once I figure out how they are pronounced).

Italics are direct quotes from MentalFloss.com.

I am not sure about the weight gain part, but I am all for grief bacon. Do the Germans have a word for grief chocolate? Or grief coffee? Cheese?

~Shemomedjamo (Georgian)
You know when you’re really full, but your meal is just so delicious, you can’t stop eating it? The Georgians feel your pain. This word means, “I accidentally ate the whole thing.”

This could be a part of my vocabulary at least three times a day. Imagine the economy of words!

~Tartle (Scots)
The nearly onomatopoeic word for that panicky hesitation just before you have to introduce someone whose name you can’t quite remember.

Tanya goes through this any time she is talking to people. She has to meet you at least twenty times before she remembers your name, even if you happen to be named John or Mary.

~Mamihlapinatapai (Yaghan language of Tierra del Fuego)
This word captures that special look shared between two people, when both are wishing that the other would do something that they both want, but neither want to to.

So there *is* a word for this…

~Backpfeifengesicht (German)
A face badly in need of a fist.

Very descriptive. I will make a note of this for future reference should I ever have sudden (or not so sudden) violent urges.

~Iktsuarpok (Inuit)
You know that feeling of anticipation when you’re waiting for someone to show up at your house and you keep going outside to see if they’re there yet? This is the word for it.

Yes. I have a different word for this. Punctuality. If more people practiced this word I would not have to poke my head out the door like a gopher every few seconds. One of these times I expect someone to be standing right outside with one of those foam bats.

~Pelinti (Bull, Ghana)
Your friend bites into a piece of piping hot pizza, then opens his mouth and sort of tilts his head around while making “aaaarrahh” noise. The Ghanaians have a word for that. More specifically, it means “to move hot food around in your mouth.”

I personally make a different noise when said thing happens, but the sentiment is there. Also, as the list goes on, I feel like other languages are very specific with their words and wonder why English is so generic.

~Greng-jai (Thai)
That feeling you get when you don’t want someone to do something for you because it would be a pain for them.

That is everything, all the time. I have such a fear of inconveniencing others I think it counts as an actual phobia of sorts.

~Mencolek (Indonesian)
You know that old trick where you tap someone lightly on the opposite shoulder from behind to fool them? That Indonesians have a word for it.

~Faamiti
To make a squeaking sound by sucking air past the lips in order to gain the attention of a dog or child.

~Gigil (Filipino)
The urge to pinch or squeeze something that is irresistibly cute.

I don’t believe I have ever had this urge, but should I ever get it, I will be prepared to explain it in Filipino.

~Yuputka (Ulwa)
A word made for walking in the woods at night, it’s the phantom sensation of something crawling on your skin.

I get this sensation each time I see a spider, ant, fly, moth, you get the idea… In fact, just thinking of these things brings on all sorts of shivery feelings.

~Zhaghzhagh (Persian)
The chattering of teeth from the cold or from rage.

I have only ever experienced one of these teeth chattering causes, but unfortunately this winter is so ridiculously hot so far that I don’t think I can use my new word. Obviously someone needs to enrage me so I may experience its second definition.

~Vybafnout (Czech)
A word tailor-made for annoying older brothers – it means to jump out and say boo.

Do they have one for younger brothers? Because then I could teach it to my daughter. Maybe I can improvise.

~Fremdschamen (German): Myotahapea (Finnish)
The kinder, gentler cousins of Schadenfreude, both these words mean something akin to “vicarious embarrassment.”

This is what my friends feel for me on a daily basis… vicarious embarrassment. I do enough clumsy, silly, illogical things each day to where all of my friends could live off of my embarrassment for the rest of their lives, never having to experience their own.

~Lagom (Swedish)
Maybe Goldilocks was Swedish? This slippery little word is hard to define, but means something like, “Not too much, and not too little, but juuuuust right.”

That is the way I feel every morning when I take my first sip of coffee.

~Palegg (Norwegian)
Sandwich Artists unite! The Norwegians have a non-specific descriptor for anything – ham, cheese, jam, Nutella, mustard, herring, pickles, Doritos, you name it – you might consider putting into a sandwich .

I need to go to Norway. And try a sandwich with all of the above.

~Layogenic (Tagalog)
Remember in Clueless when Cher describes someone as “a full-on Monet… from far away, it’s OK, but up close it’s a big old mess”? That’s exactly what this word means.

You mean they have a word to describe my entire life? I love it!

~Bakku-shan (Japanese)
Or there’s this Japanese term, which describes the experience of seeing a woman who appears pretty from behind but not from the front.

I prefer to be looked at sideways, personally. Right side if possible.

~Ya’arburnee (Arabic)
This word is the hopeful declaration that you will die before someone you love deeply, because you cannot stand to live without them. Literally, may you bury me.

I think this is every parent for their child. I hope.

~Pana Po’o (Hawaiian)
“Hmm, now where did I leave those keys?” he said, pana po’oing. It means to scratch your head in order to help you remember something you’ve forgotten.

Does it count if you just twirl your hair unconsciously while staring at the ceiling?

~Slampadato (Italian)
Addicted to the UV glow of tanning salons? This word describes you.

And everyone else in Southern California. If you are glowing orange, you are addicted to tanning salons. Just saying.

~Zeg (Georgian)
It means “the day after tomorrow.” OK, we do have “overmorrow” in English, but when was the last time someone used that?

Actually, several languages have that notion. English speakers just don’t use it, despite it’s obvious usefulness. Think of how much easier you could make plans.

~Cafune (Brazilian Portuguese)
Leave it to the Brazilians to come up with a word for “tenderly running your fingers through your lover’s hair.”

~Koi No Yokan (Japanese)
The sense upon first meeting a person that the two of you are going to fall in love.

~Kaelling (Danish)
You know that woman who stands on her doorstep (or in line at the supermarket, or the park, or in a restaurant) cursing at her children? The Danes know her, too.

I think everyone knows her. And shaking their heads.

~Boketto (Japanese)
It’s nice to know that the Japanese think enough of the act of gazing vacantly into the distance without thinking to give it a name.

I thought it was called spacing out. But then again, that is two words.

~L’esprit de l’escalier (French)
Literally, stairwell wit – a too late retort though of only after departure.

Hindsight is 20/20. And easier to pronounce.

~Cotisuelto (Caribbean Spanish)
A word that would aptly describe the prevailing fashion trent among American men under 40, it means one who wears the shit tail outside of his trousers.

Men over 40 do this as well. Obviously they need a new word.

~Packesel (German)
The packesel is the person who’s stuck carrying everyone else’s bags on a trip. Literally, a burro.

You generally can find this man with his family, carrying his wife’s and his children’s things. They refer to him as Hubby or Daddy.

~Hygge (Danish)
Denmark’s mantra, hygge is the pleasant, genial, and intimate feeling associated with sitting around a fire in the winter with close friends.

I need to immediately board a plane for Denmark. And while there make friends in order to partake in this.

Well when you put it that way… no wonder it keeps failing.

~Bilita Mpash (Bantu)
An amazing dream. Not just a “good” dream; the opposite of a nightmare.

When I am done making friends in Denmark I need to fly to Africa and take a nap.

~Litost (Czech)
Milan Kundera describes the emotion as “a state of torment created by the sudden sight of one’s own misery.”

Very Camus like. Does Kundera describe what one must do when coming to this realization?

~Luftmensch (Yiddish)
There are several Yiddish words to describe social misfits. This one is for an impractical dreamer with no business sense.

I guess this term is reserved for the son-in-law.

What happens when I spill my coffee on myself? Because I do it all the time, and I feel if this is the case, I should have my own word.

P.S. The picture seems to have nothing to do with this post, but who doesn’t want to see cute kittens sleeping? I think there should be word for “a sleeping small furry creature.” If there already is one, please let me know immediately.