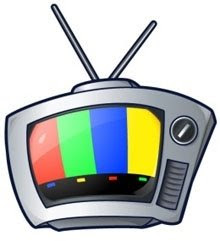 Whether or not your child watches TV is a controversy onto itself. For those of us who do let our children watch TV, what is appropriate? Let’s face it, there is only so much Yo Gabba Gabba or Wa Wa Wubbzy I can tolerate in one day.

When I am sitting on the couch with my daughter, watching Nick Jr. with her, and I need to change the channel for a little sanity, what shows and or channels are really that inappropriate? Is daytime TV going to teach her how to become a mafiosa and marry the ringleader of some exceedingly wealthy east coast family? Are talk shows going to get her to question the way she looks?

What about in the evenings? My husband loves Family Guy. Is it wrong to subject a sixteen months old to Stewey’s potty mouth? I don’t think she understands any of the jokes, or what they are really saying. So, as far as I am concerned, she is just watching the cartoons for the visual aspects.

When we first moved into our house and cable was not yet installed, we would put on Simpsons DVDs for her to keep her busy while we unpacked. But even with as bawdy as the Simpsons at times get, it is not the same as putting on CSI where they show replica carcasses and other material which could potentially give Munchie nightmares for many months to come. But shows like these are the extreme. So where is the line drawn? When is adult TV too grown up?

Yes, in make believe land this would not be an issue, and I would be able to entertain my daughter every second she is awake without the use of TV. However, in real life, I need a break, and a shower, so the Wonder Pets are going to have to baby sit for a few minutes. Also, even when I am with her, there are times I just want to sit next to her, mellow out, and cuddle. TV zones her out just enough to make this happen.

What channels and programs do you allow in your house?