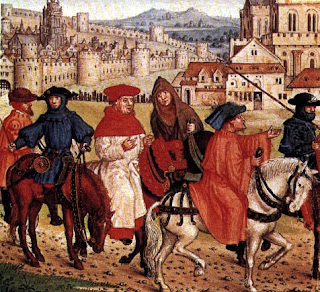 Looking at some of my Chaucer research just now, and revisiting the manuscripts, a thought occurred that at first seemed most bleak.
There are dozens of scholars and even more articles and books written, all attempting to figure out which one of the extant manuscripts of the Canterbury Tales is most authoritative in regards to authorial intent. So far Ellesmere is in the lead, with Hengwrt thought to be its prototype. But what if that is not the case? I don’t mean to argue whether there is a manuscript better suited for this purpose than Ellesmere. I mean, what if none of the manuscripts come close to authorial intent? I know most scholars have avoided this strain of thought, simply because it is difficult to prove tale ordering if there is nothing to work with. What do you build from nothing?
Not to mention, to argue that none of the manuscripts reflect original authorial intent, then the lack of proof is not proof at all, and the only proof can reside with what was found at Chaucer’s death in his desk (and here I mean physically in his desk… this is not a metaphor for anything). Many have searched for this, and the debate of what documents or transcripts were legitimately there has been going on for over a century.
Record keeping wasn’t at its best back then. Things got lost. And who would have known that whatever scraps of parchment and velum they found in a small house he rented would be of any value centuries later? His one heir, Thomas, seemed completely disinterested in his father’s work, and did not pursue any of it further. Nor did he contact any of the scribes thought to be working away at any of his writing. Whatever may have been left of the Canterbury Tales in Chaucer’s desk may have come into Thomas’s possession. But no mention is made of it.
So I can see why few have even attempted making the claim against all manuscripts. And I say “few” because even though I have not seen any does not preclude them from existence. I am sure they are out there.
One day, when I have more time, and more resources, I want to explore this strange “what if” question. Maybe I will make a living of it.