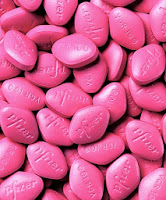 A friend of mine recently posted an article, “‘Female Viagra’ Could Cause ‘Societal Splintering,’ According to Scientists.” I was unaware that such a thing existed, but apparently there is a company that is currently in the later stages of testing and releasing their new drug, Lybrido, which is essentially the female equivalent to viagra.

I looked further into the drug facts, and found a New York Times article (among a few others) outlining how the drug works, and what the side effects may be. One of the primary founders was actually quoted describing his fear of creating medically induced “nymphomaniacs.” Wow.

“You want your effects to be good but not too good.”

Because you definitely don’t want sex crazed women running rampant anywhere. The initial study in female sexual interest, or lack there of, emerged from the common complaint that a majority of women don’t have adequate sex drives (who made this complaint? And what is adequate?). What these scientists failed to take into consideration is that the female sexuality “problem” is not easily solved by a peppermint coated pill, but rather a societal change that stops condemning women for whatever sexual desires they do have.

When you describe a woman as either frigid or a nymphomaniac, you leave little room for sexual exploration or desire. Think about it. How many times is a man going to call a woman a whore, or even leave her for expressing curiosity or opening up about fantasies before she shuts down and refrains from even admitting such things crossed her mind? And women are just as guilty of quick name calling and belittling those who dare to achieve satisfaction or fulfillment. It is not difficult to see how frigidity can become the norm as women become accustomed to nothing more than the most basic sexual acts. Boring sex begins to look good to the woman who has been judged and punished in the past. Except it is not that good, and pretty soon she stops wanting it altogether. All of a sudden you have a “hypoactive sexual desire” epidemic that scientists feel they must find a cure for.

I am not arguing that there are not actual women out there who could benefit from this drug due to various hormonal changes, etc. But when even the scientists creating this drug appear to be terrified by the idea of creating a sexually aggressive woman, it seems like the problem might not be a fully medical one.