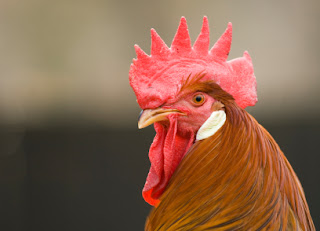 My house’s property value just dropped around 30K. It has been slowly decreasing ever since my neighbors moved in. Yes, theseneighbors. But I think they have now just struck the jackpot in the house next door depreciation game.
They have been getting on my nerves for two years. Yes, I know I have only lived here 1.5 years, but I am rounding up. And it feels like they have been driving me batty for about five years, so technically I am averaging. I think.
Anyway, as I lay awake this morning in anticipation of my alarm I hear a strange noise. It sounded like a rooster. It took this noise repeating several times before I realized it was indeed a rooster. Not because I don’t know what a rooster sounds like, but because I don’t know why I would be hearing a rooster in my back yard. I may have a lot of cats, and dogs, and children, but I definitely don’t have a rooster.
My first thought was to go outside and investigate. Then I remembered the rooster incident of 2008. I work at an educational institution that has a large agricultural area. One warm afternoon I decided to go take a stroll by the pond. On the way back to my office I encountered a rooster. A very angry rooster. This may have been the first time I had ever seen a rooster up close. Trying to pet it may not have been the best idea. Next thing I knew he was flapping his wings every which way, screeching at me, and chasing me down the dirt road. Once I made it close to the main campus he stopped his pursuit. And I made it back to the office looking as though I just got assaulted in the parking lot. Moral of the story: roosters are scary.
So I decided not to go outside to investigate. I briefly contemplated poking one of the kids awake and sending them out there. Because I am a good mother like that. It would probably have been Ducky. I figured he would have been the best suited for identifying one of his fellow foal. But he can’t talk, so he wouldn’t be able to relate any information back. Also it would probably be terribly irresponsible of me to send my children out in the predawn darkness in an encounter with what was probably a half crazed rooster. Because there is no other kind. They are almost as scary as geese.
Therefore I did what any normal person would do and decided to ignore it. Well, after looking into it, it turns out the neighbors got a rooster. They say the rooster is visiting. Uh huh. Good luck selling this place any time soon.