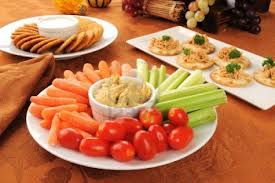 I don’t understand veggie platters. They are present at every party, and hosting an event without one is heavily frowned upon. So you have one out that invariably doesn’t end up getting eaten because who goes to a party to eat raw celery sticks?

Don’t misunderstand me, I do like vegetables, and include them in most meals to some extent. But at a social outing if the veggie platter is competing with the cheeses and other deep fried goodness, well, the platter doesn’t stand a chance. Considering most of the parties I have been to ended with these trays just as stacked at the end of the night as they were when I arrived, I don’t think I am the only one who feels this way.

It must be a guilt thing. People feel guilty having all of the junk food around, so they rely on the veggie platter to absorb the guilt. If only it would also absorb the yumminess.

I don’t necessarily make a conscious effort to avoid the platter, but something else, more delectable, always catches my eye before I even notice the veggie platter was there. I think the problem is with the vegetable selection. The usual suspects are celery, broccoli, baby carrots (don’t even get me started on baby carrots!), and cherry tomatoes. Nothing exotic, intriguing, or even a mild curiosity. Celery sticks are the rice cakes of the vegetable world. Flavorless filler.

If there were more options I think I could get behind this. Deep friend, beer battered zucchini. That is *my* idea of a veggie platter.

Tomorrow I will be going into day three at the office of having celery throughout the day trying to finish it out. And then I will have a tub of ice cream for dinner. To cleanse the palette.