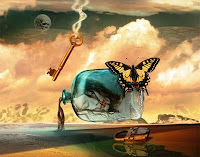 I am in love with an imaginary man. It has been long enough to where I thought everything would surely by now fade into sepia.

I like to tell myself that once in a while he may imagine me, because the alternative hurts. But I can well guess the truth. I didn’t fade into sepia. I was probably not even an afterthought. If he ever does think of me, it is probably in passing, and nonchalant. Just like he doesn’t physically exist in my life, I don’t exist at all in his.

He is not perfect. No one is. But to me he was. Next to him all others pale in comparison. And he lives in my head. I ache for him daily, and tell myself it will pass. I long for the talks, and the walks, and everything else.

I used to await the day I could love him without inhibitions. Now I can openly revel in his memory. Oh joy.

I probably should get him out of my head. But I don’t know how.