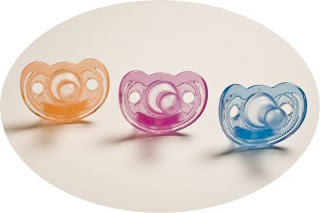 At my daughter’s one year doctor’s appointment we were informed that we need to start weaning her off of her pacifier. We had no problem getting her to stop having a bottle and drink from sippy cups. She transitioned to adult food quite nicely. Several months later and we can barely get her to put her pacifier down for more than the time it takes her to eat.

I have tried distracting her in the hopes she does not notice when I sneak it away for extended periods of time. She notices within minutes. I would pretend I don’t know what she is searching for. She then shrieks at the top of her lungs and looks up at me with pleading eyes, knowing mommy is responsible for her lost pacifier. I give in and pop it in her mouth.

Eventually she will get over the pacifier. Right? I like to tell myself that, but sometimes I get a little doubtful when I go to the store, or park, and see four and five year olds still sucking on pacifiers. I don’t want her to start kindergarten with a pacifier in her mouth. I worry she will get teased by the other kids. Even more so I worry I will be judged by the other parents and her teachers. How irresponsible of us to allow our six year old to still satisfy her oral fixations with a pacifier! Don’t you know what that can lead to? When I hear people say things like that, I can’t help but think “you are talking about overeating and obesity. Right?”

Some parents are perfectly fine snatching the little pieces of plastic right out of their kids’ mouths as soon as they turn one. Others don’t care one way or another. I personally don’t know what to do. I dictate her bed time, what she eats, when she bathes, and various other routines. But when it comes to her eyes looking up at mommy begging for her paci, I relinquish it to her.

What do you think about children using pacifiers?