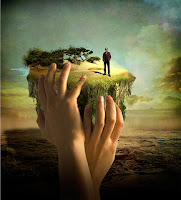 No man is an island.

Really? Think about that for a second, when you decide what you will, or will not, allow to affect you. Everyone is so desensitized to everyone else, it is a miracle society even goes on. No man is an island? We have all built islands around ourselves with heavy duty motes to keep out everyone else, isolate ourselves from what we don’t want to deal with.

I am not going to pretend I am any better. I take care of my children. I look after my loved ones. I don’t have time for anything else. When is the last time I took up a world cause? Um… never.

No one seems to really be involved in mankind. Unless you count the fact that we all share certain genetic pieces. Then sure, we are all involved with one another. Until we need one another. Then the other disappears.

The worst part is that the islands have drifted apart, further than the continents since the time of Pangea.

And the new motto seems to be that as long as I don’t hear the damn bell toll, it doesn’t toll for me.