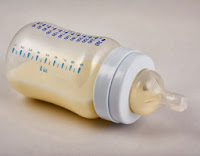 I hated when strangers would ask “is she eating enough?” You mean, am I starving my child? Why no, thank you for asking.

Just like I hated when people would ask if I was a teenager when I got pregnant. I think somewhere in there was a compliment on how young I look, but it didn’t come across, and it bothered me.

Anyway, back to the weight issue. Talking to Tanya she mentioned some of her new mom friends were very concerned about properly feeding their children. The whole breast feeding versus formula debate sort of thing. They all seem concerned with wether they should supplement.

Well, how you feed your child is none of my business, and any advice I have is rife with opinion. Yes, I think breast feeding is best, but I also understand it is not always possible.

I exclusively breast fed both my children, until I went back to work. Then it became a tricky balancing act. In lieu of actually feeding them I would have to pump. The options are limited, and just like most women in the same situation I would hide out in a bathroom stall with a manual pump, squeezing away at it until my hands and breasts hurt, only to get a few ounces of milk in a bottle. Three was fine. Four was optimal. Two was the average.

Those two ounces would sometimes take twenty minutes of heavy pumping that entailed a lot of schedule shifting and planning.

One of my friends who works in a corporate environment at a predominantly male company in Silicon Valley would get so overwhelmed and flustered by this she would often find herself locking her office door and hiding under her desk to pump. One time, she managed to knock over the bottle, spilling all of her production for the day. She emailed in tears, having nothing to bring home to her baby that night, panicked that she was risking her baby’s health – she was certain she was a terrible mother.

I remember waking up at two and three in the morning to get an extra pumping session in as buffer for those days I could not produce. My freezer was stocked with tiny bags of strange opaque fluid that turned an interesting iridescent blue and yellow when frozen.

At four months I had to wean my daughter onto formula. I wasn’t pumping enough, my production went to almost nothing, and if I didn’t start supplementing then I would actually be starving the already tiny thing. I felt incompetent and dejected. I have had issues with my breasts since puberty, always failing me, and here was another example. They had no sex appeal (whether you feel that is socially constructed or not), and now they weren’t even fulfilling their biological purpose. If only I could have turned tears into breast milk.

My son came along and I was determined to do it right this time around. He lasted about three and a half months. Just like with Ally I went back to work when he was about six weeks old, but I increased my pumping regiment, and became exceedingly diligent about it. But, unlike Ally, he wasn’t a tiny baby requiring only a few ounces. He was big at birth, and then had several large growth spurts within the first few months, requiring well above the normal amount of nutrition. I was very proud of myself for having kept up, and for the ever growing stock pile of little baggies in my freezer. I was determined that this child would get it all.

This child got it all for about three months, and then I realized that with a twelve hour work day, breast feeding was not going to happen. This time my tears didn’t come from feelings of failure, but rather from realizing in those last evening that that was the end of my physical bond with my son.

I consoled myself that even if I could make it work, somehow, for a little longer, when my son would be a little over five month old I would be going back to school, and my twelve hour work days would turn into sixteen and seventeen hour marathons.

So my children had both. They started out with breast milk, but ended up with formula. And they are both alive and well. Neither of them have had any health problems aside from a few colds and fevers. There are people out there who will not miss this opportunity to remind me that breast milk offers amazing immune system building benefits and those colds could have been prevented had I not switched to formula. They might be right, but as far as I can tell, no one has died from a catching a cold.

So for those mothers out there having panic attacks over the amount of milk they can produce, as long as your baby is gaining weight and growing, you are probably doing fine. And if you are not, just get the formula because milk is milk – it doesn’t make you a bad mother.