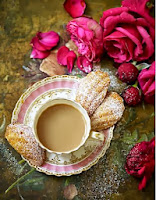 Have you ever eaten a donut that looked so good you wanted to be seen with it? Me neither. Donuts are delicious, but not particularly showy.

Today, I took one of those silly online quizzes to see if I could identify the “signature” foods for different novels. It was fun, and one of the prompts had a picture of madeleines. The answer was obvious. Proust. Remembrance of Things Past. (It was multiple choice, and if you had seen the other choices, the answer would be obvious to you too, because no where in Robinson Crusoe is anyone eating fancy French tea cakes).

I remember how much I had loved madeleines after having read the novel. I was young, and they sounded so sophisticated. I had never seen them sold by the box. Individually wrapped, expensive morsels of sophistication. Back in the 90’s a box of a dozen donuts at the corner shop cost about $3.50, if not less. A packet of madeleines containing exactly two cookies a little bigger than my thumb cost the same. And donuts were infinitely more delicious.

But you see, standing around with a giant chocolate donut on a paper plate was nowhere near as sexy as sipping a cup of tea with a few delicately strewn madeleines plate side.

Have you ever heard of a damsel in distress being rescued while eating donuts? Me neither.

Breakfast At Tiffany’s. Holly Golightly is having a croissant, French pastry, cousin to the madeleine, not a bear claw.

Because I am kind of running out of examples, so it would be really helpful if you did.

Well, while you are thinking about it, I will be at home privately ravaging donuts, but if anyone asks, I am having creme puffs. Ok?