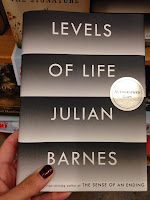 I just finished Levels of Life, and I can’t remember a book making me cry this much. It was beautifully constructed, orchestrated through the chapters to the end that intermingled all that was before, much like life, but without an actual end.

This book does not concern itself with endings, but rather with the process of life, and the ordeal that is death. The coming to terms part that is ever so hard to endure. The finale that all of us have to go through, but not in ourselves, in those we love, is here displayed in the raw.  As the story unfolds, so does the quiet devastation of loss. Yet, in the end it is not death that is encapsulated, but rather life. Watching someone you love die, and then continuing to live.

There are moments which appear to indicate some kind of progress. When the tears – the daily, unavoidable tears – stop. When concentration returns, and a book can be read as before. When foyer-terror departs. When possessions can be disposed of (Orfeo had things worked out differently, would have given that red frock to charity). And beyond this? What are you waiting for, looking for? The time when life turns back from opera into realist fiction. When that bridge you still drive under regularly becomes just another bridge again. When you retrospectively annul the results of that examination which some friends passed and others failed. When the temptation of suicide finally disappears – if it ever does. When cheerfulness has become more fragile, and present pleasure no match for past joy. When grief becomes “just” the memory of grief – if it ever does. When the world reverts to being “just” the world, and life feels once more as if it is taking place on the flat, on the level.

These may sound like clear markers, boxes awaiting a tick. But among any success there is much failure, much recidivism. Sometimes, you want to go on loving the pain. And then, beyond this, yet another question sharply outlines itself on the cloud: is “success” at grief, at mourning, at sorrow, an achievement, or merely a new given condition? Because the notion of free will seems irrelevant here; the attribution of purpose and virtue – the idea of grief-work rewarded – feels misplaced. Perhaps, this time, the analogy with illness holds. Studies of cancer patients show that attitudes of mind have very little effect on clinical outcome. We may say we are fighting cancer, but cancer is merely fighting us; we may think we have beaten it, when it has only gone away to regroup. It is all just the universe doing its stuff, and we are the stuff it is being done to. And so, perhaps, with grief. We imagine we have battled against it, been purposeful, overcome sorrow, scrubbed the rust from our soul, when all that has happened is that grief has moved elsewhere, shifted its interest. We did not make the clouds come in the first place, and have no power to disperse them. All that has happened is that from somewhere – or nowhere – an unexpected breeze has sprung up, and we are in movement again. But where are we being taken? To Essex? The German Ocean? Or, if that wind is a northerly, then, perhaps, with luck, to France.

I understand that large parts of this passage make little sense out of context, but surely the meaning is intact, and if anything, provides enough of an incentive to read the rest, if only to decipher the meaning of the last lines, or the references to living “on the level” and Orfeo.

There are many levels of life, and as it continues, so do many of these levels get peeled away. They were intermingled with others that no longer exist, and each one lies closer to the core, where muted melancholy meets understanding. Not of anything great, but the simply kind of understanding that breeds acceptance, any maybe peace. At the very least, a will to move forward.