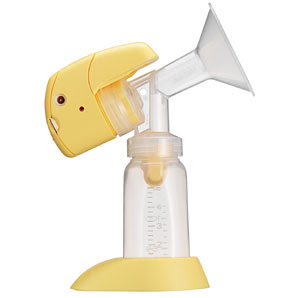 During my first pregnancy the idea of pumping milk from my breasts was foreign. I saw the activity as something I would be doing once or twice a week in order to have a few bottles in the freezer just in case. I pictured breast feeding my daughter every time she was hungry and not needing a large amount of stored milk.I knew I would eventually go back to work, but I was delusional about pumping for that as well. I envisioned pumping right before bed every night, and somehow that would last her all day the next day. I had no idea how tedious pumping would be. I did not realize that production slows down if you do not pump regularly.

Once my daughter was born and all of this new information began sinking in, I had yet another revelation. There are quite possibly more makes and models of breast pumps than there are automobiles. I by no means purport to know which is best for you, however, the advice I will impart is that regardless of which brand you chose, get the electrical one.

I made my breast pump decision based on budget. I didn’t see any reason to spend over a hundred, possibly two hundred dollars, for something I thought I would only occasionally use. I regretted my choice only a few weeks after my daughter was born. At this point I was only pumping a few times a week, oblivious to the fact that I would need massive stores once I returned to work (yet another regrettable decision made in blissful ignorance).

Squeezing the little manual nozzle hundreds of times in order to procure a full bottle starts to become painful and cumbersome. Imagine doing this three to four times per day. I should have heeded the advice of the retail clerk at the baby store. Stupidly I just assumed she was trying to up-sell me (which she may also have been doing, but that is beside the point). What did she know about my needs? Apparently a lot.

In the end I ended up spending more since I now had a useless manual pump along with a need for a mechanical one that was destined to make my breast feeding days much nicer.