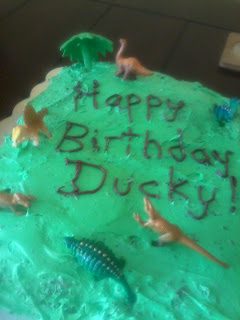 For a one year old Ducky has had his share of birthday parties. Last week we had his aunts in town from Chicago and Florida for a small family celebration. Then a few days later several more family member came by for dinner for the same reason. Today was the big event where everyone gathered at our house to see him on this milestone occasional. And where was Ducky during all this? Taking a nap. The guest of honor was in absentia.
I have been up since three this morning baking and decorating his cake (pictured above, although a terrible picture), prepping, cleaning, and everything else such a thing entails. Munchie was very helpful. She saw the concentration on mommy’s face and knew better than to interfere. I must be getting better at this sort of thing since everything happened almost without a hitch. Almost.
By noon the house was spotless, the cake was done, the food was made, and I had somehow in the midst of everything managed to make myself look presentable. As I was about to finally sit down and have my fifth cup of coffee (but who is counting?), I realized I left out one significant piece of the party planning. I had no silverware or plates. I suppose I could have told the guests that the food was for viewing only, but I had a suspicion they would have been disappointed. By this point there were several early comers (at least a few of which were competent enough to watch the kids), and I made my way to the store.
One would assume paper plates and plastic forks could be found at just about any grocery store. Assuming is never a good idea. Especially on a Saturday afternoon when apparently everyone has decided this was good time to go shopping. After spending twenty minutes trying to find parking (and I wasn’t even trying to park anywhere near the actual store… I knew better), I ran through every aisle trying to locate these items. At first I tried the obvious aisles (picnic supplies, napkins and paper products, etc.). Nope, not there. Maybe there is a fancy term for them that grocery stores use? So I tried several more aisles. Nope, not there either. Since I was there for only two items I wasn’t using a cumbersome cart or even a basket, making it possible to move swiftly. Twenty minutes later I had made it through every aisle. Twice.
Since the store was very busy there wasn’t anyone I could really ask without interrupting what they were doing, but I figured this would be a quick question. I asked the first cashier. She told me to look over by the napkins. Um… that was the first place I looked. The second cashier told me to look in the picnic supplies area… yeah, did that too. The third cashier told me to look over in the napkins area… again?
Obviously I had missed something. So I went back through the store once more. No, I didn’t miss anything. These things clearly didn’t exist. By this point the full guest list had pretty much arrived, so I was out of time. I went to a different store. Surely this store would have what I need. I skipped the searching around altogether and headed right up to the first person who worked there. She directed me to aisle nine. Which happens to be the freezer section. Part of me wanted to look. Who knows, maybe I have been storing my paper products incorrectly all these years. After all, I am not a supermarket product placement specialist.
I went through the entire store here too. But this time I lucked out, and found the paper plates. They were in the baking aisle. I guess on some level this makes sense. Maybe. But where were the forks? Don’t they go together? Have I been this disillusioned about my silverware? And why hasn’t anyone pointed this out?
As it turns out the forks were next to the chips. I am pretty sure those two definitely don’t go together.
By the time I got home it was well past one, and as I suspected, everyone had arrived, wondering where I was. And Ducky was in a frenzy.
He is not used to seeing this many people all at once. All the commotion, and the fact that I wasn’t there, left him pretty frightened (and crying). I tried calming him down, but he wasn’t having it. He was one angry bird.
I am not terribly good at math, but I do know that a one year old, plus no nap, plus commotion, equals disaster. He stopped crying but remained fussy the rest of the afternoon. An hour or so into the festivities I could see his tired little eyes barely staying open. I was hoping to get him down for a quick nap before having the cake and opening his presents. Ducky had other plans. He went down for this nap. And stayed there the rest of the day.
By three we all decided we couldn’t wait any longer and served the cake. We sang happy birthday to Munchie (who is now very confused about how birthdays work since she just had one a few months ago and didn’t know she would be getting another one so soon). And then I opened Ducky’s presents and showed them to a picture of him we had propped up on the high chair. His picture approved of all the gifts. 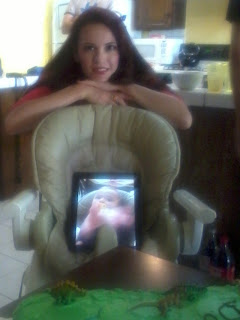 Aside from the few unforeseeable circumstances, today was a success.
And a big thank you to those who stayed to help me get everything in order again this evening! Thanks to you I may actually get some sleep tonight.