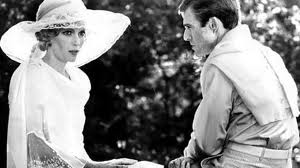 The Great Gatsby movie is coming out this weekend. Like many other people, I am very excited, and have been waiting for its release since December when I saw the first previews. However, as opening day draws near, and more are discussing the film in person, online, and through various forms of print, I realize Fitzgerald’s message has somehow been lost. Either that, or few have actually read the book.
One of my friends posted an article today that presented this very problem. I know it is hard to focus away from the lavish soiree scenes and the decadence on display, but the focus is actually in those moments when these things are absent. Despite what many believe, the novel did not condone this behavior, but rather used it to broadcast the decay brought about through unmitigated wealth and status, particularly in the upper class. Further the moments when these trappings are removed, the characters are shown in their most natural demeanors.  The desperation and depression becomes apparent, and the failure despite a fabricated reality is made starkly clear. It is a personal failure that money cannot remedy.
This ideology comes in the most purist form, based on the maxim that money does not buy happiness, taken to the extreme. I have my opinions on the matter, but seeing as how no one has ever handed me immeasurable sums of money, I cannot draw an informed conclusion. While I may not necessarily agree with these points of the novel, I do see the plight of the characters. I understand that some things are more important than monetary wealth.
Gatsby’s money brings around many people, but in the largest crowds he is alone. His guests are not his friends. Before he recreated himself as Gatsby he was not acceptable in the kind of company he keeps, and he has little in common with those surrounding him. One person yesterday incorrectly interpreted the society scenes implying that he catered these events to which he rarely showed up because he was a philanthropist and wanted to see others happy. He was no philanthropist. While I don’t doubt this person read the book, they must have missed the part where he explicitly states he threw parties night after night hoping Daisy would come. That is all. No philanthropy involved. I think the most telling scene which epitomizes his solitude along with Fitzgerald’s social commentary comes towards the end. I will not mention it in the hopes that enough people will be curious enough to read the book, and for those who simply want to watch the film.
Honestly I am curious to see how the film touches on these issues, and how the main points come across. From the previews I have no doubt that the visuals will be quite spectacular. I am just very much hoping the entire film isn’t just an exhibit of sartorial elegance, glamorizing the very points Fitzgerald attempted to critique.