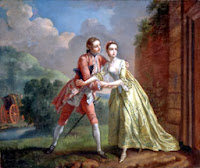 I had this crazy idea last night.

In light of my GRE scores I have been compulsively rewriting every other part of my application, however, last night I had done it so many times my brain just decided it wanted to stop.

I was proofreading/rewriting my statement of purpose for the umpteenth time and in the middle of everything I started thinking about Clarissa. Yes, *that* Clarissa.

No, I did not include the latter in my statement. I am not presenting a stream of conscience piece. Unlike everything else in my life that pretty much emulates my blog posts, this is not one such thing. I am actually trying to impress people with this thing.

Since this was a totally random thought, I have not researched it, and have no academic proof that I am onto anything, or that I am on to anything new. I might be right, and fifty other people may have already written about this.

However, this is not pressing, so it will go into my “should I have some time” pile to be looked into at a later date.

In the meantime, here is the most basic outline for my connection:

Clarissa and Caleb Williams appear to have a similar compulsion to remain true to themselves at their own detriment. She harbors an unfaltering conviction to preserve her chastity and virtue while his actions are dictated by what he believes to be his moral compass. Even once they are respectively compromised, and abandoning their their quests would be in their best interests, they set out to vindicate their names while continuously getting trapped by their oppressors. He is returned to jail as many times as she is returned to the brothel – against their will, but significantly through their own doing.

As the “theater of [their] calamity” unfolds, each fixate on the dominant figure in their lives, pursuing him out of stubborn, and for lack of a better term, stupid curiosity, unable to leave well enough alone when told to do so. Each begets an unfavorable end (with Caleb it depends on which ending you use).

As I write this I realize this very pattern could also be applied to Howard Roark with slight variations (and probably many other characters along the way). But something specifically about Clarissa and Caleb elicits a connection to be made. I like to think of Clarissa as the female version of Caleb, and in a sense she is, except Clarissa was written some fifty years before Caleb, so if anything, the relationship between them is inverted.

Yet unlike Roark, or other characters who share the same plot and fate, these two were written under similar conditions, sharing the sentiments and conventions of their time.

And having absolutely nothing to base this on except that in an almost delirious state of exhaustion I had a hunch, I shall put this aside and not mention it again until I have something better to go on.