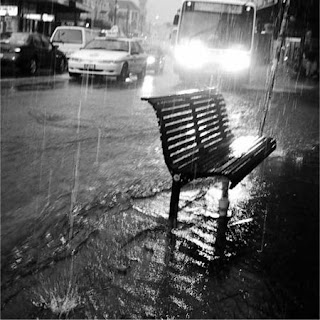 Today a friend of mine posted a video on Facebook. It was only fifteen seconds long, but it was beautiful. I wish I could share it here, but I haven’t the slightest clue how to get it off Facebook. I am sure she would not mind, as it was made public, and there are no people in it.
She took this video as she was walking home last night. It was pouring rain, and it was beautiful. It made me nostalgic for a city I have never lived in, and have not even ever seen. Several close friends of mine live there, or around there, and have often invited me to come. Maybe I should, but I have not yet.
In those fifteen seconds her city looked like any other, some of which I have lived in. It reminded me of New York when I was a little girl. It reminded me of San Francisco on the many occasions I have had the chance to visit. It reminded me of Paris, London, Bucharest, and several others in Europe I have been to over the years. It was nondescript, yet distinctly city like. The buildings and street were unquestionably urban.
She took the video as she walked, and her pace seemed steady, calm, used to the falling sheets of water. Brisk, yes, but not alarmed. Not like the suburban haphazard dash towards cover at the slightest provocation, the tiniest drops from the sky. Despite the fact that she was born and raised in Southern California, she seems to have adapted well to her new surroundings. I was not born or raised in Southern California, yet I have acquiesced to its climate, and somehow managed to bury myself in the deepest recesses of its suburbs.
I have moved to a place that only has one and a half climates (at best). Half the roads are unpaved, not because they have been well worn, but because they never existed. Everyone goes to bed at nine. And I blog nightly to escape.