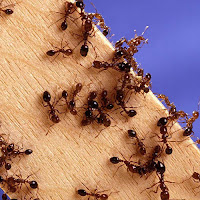 My office has ants. Sometimes we get them in the summer, but we haven’t had them in years so I had forgotten about them. Today they came in hoards. And they weren’t even in the obvious places. They wanted nothing to do with the food, and stayed clear of our kitchen room in the back. These ants seem to like paper products, which in an office can be found everywhere.

I spent most of the day cleaning down surfaces and went to the store to get some insect spray. I think I used the entire bottle, dousing every surface, including the floor, several times. It slowed them down, but then more kept coming. Basically it was an ongoing battle.

Every time I picked up a pen, went to use my keyboard, tried grading, or anything else, my hands would be covered.

Tonight I think I took the longest shower ever. I am sitting here, seemingly clear of ants, but I can still feel them wriggling around on me, running across my legs and feet, and a few of the little buggers tried going down my shirt. It is totally creeping me out. Also, these are apparently the kind of ants that bite. That was fun.

All day I could just picture their itsy bitsy teeth sinking into my flesh. *Shudder*

I am probably going to wiggle around all night fighting off imaginary ants in my sleep. Thank God Tanya is on maternity leave. She would have had a heart attack.